The City of Laramie obtains municipal water from two primary sources: the Laramie River and the Casper Aquifer. Utilization of these resources offers Laramie great flexibility in meeting its municipal water needs.
The 1868 Dowlin water right is the number one priority right along the Laramie River system and is attached to the land per Wyoming water law. The City of Laramie has been acquiring Dowlin Ditch surface water irrigation rights since the 1940's and these efforts now provide 40% of the water consumed by our community during an average year. Over the last 10 years, annual water consumption has been 1.8 billion gallons and is expected to increase with continued growth of the Laramie community.
In 1981, the City acquired 20 cubic feet per second (cfs) of the Dowlin Ditch water right with the purchase of the Monolith Ranch. In 2022, seizing upon a rare, once in a generation opportunity, the City will acquire an additional 10 cfs of water with the purchase of the Bath Ranch (formerly known as the Hart Ranch) to secure Laramie's water future.

The 1868 Dowlin Ditch water right is the number one priority right along the Laramie River system. The purchase of the Bath Ranch will add an additional 10 cfs to the existing 20 cfs the City acquired with the purchase of the Monolith Ranch in 1981.

View of Dowlin Ditch facing north on the Bath Ranch property. Taken in April of 2022.
Next Previous
Water development for the City of Laramie has evolved through two distinct phases. The first phase, from 1868 to about 1940, relied on natural discharge from three nearby springs receiving water from the Casper Aquifer - City, Pope, and Soldier Springs. This gravity fed system was attractive because of the low cost of operation; however, the amount of water available to the city was only what the aquifer offered by way of natural discharge from the springs. With installation of the Pope Wells in 1937-39, the City began to draw on the storage capacity of the Casper Aquifer in order to meet water needs of its growing community.
The second phase began in 1940 with a move to tap the Laramie River. After some turbulent times, the City purchased water rights from three holders of the Dowlin Ditch - the first priority right of the Laramie River. In 1945, the City proceeded with a water right transfer of 10 cfs (cubic feet per second) from the Dowlin Ditch to the Pioneer Canal for municipal use and the Wyoming Board of Control approved this change of use. The City constructed a 20-inch pipeline from Sodergreen Reservoir to carry water to the City in 1947. At that time, Laramie River water was to be used for railway purposes and lawn irrigation at the cemetery and on part of the university campus. By making river water available to the Union Pacific Railroad, the railroad was willing to exchange its water right in City Springs for municipal use. In 1953, municipal demand for water had grown to the extent that the City chose to treat some of the Laramie River water for use in its municipal system. A water treatment plant was constructed at the intersection of Garfield and Pine streets for this purpose.
In 1963, the City again petitioned the Wyoming Board of Control to convert 4.3713 cfs of Dowlin Ditch water rights to use for municipal purposes. The Board allowed the transfer of only 4.3113 cfs when it was discovered that the City had not acquired 0.06 cfs attached to the 9.62 acres owned by the Laramie Valley Railroad Company. With the 1964 transfer, the City has the right to divert from the Laramie River at the Pioneer Canal head gate. The City then constructed a water treatment plant near Sodergreen Reservoir with a capacity of 6.8 million gallons per day and added a 24-inch pipeline to bring treated water within city limits. 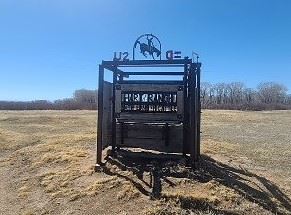 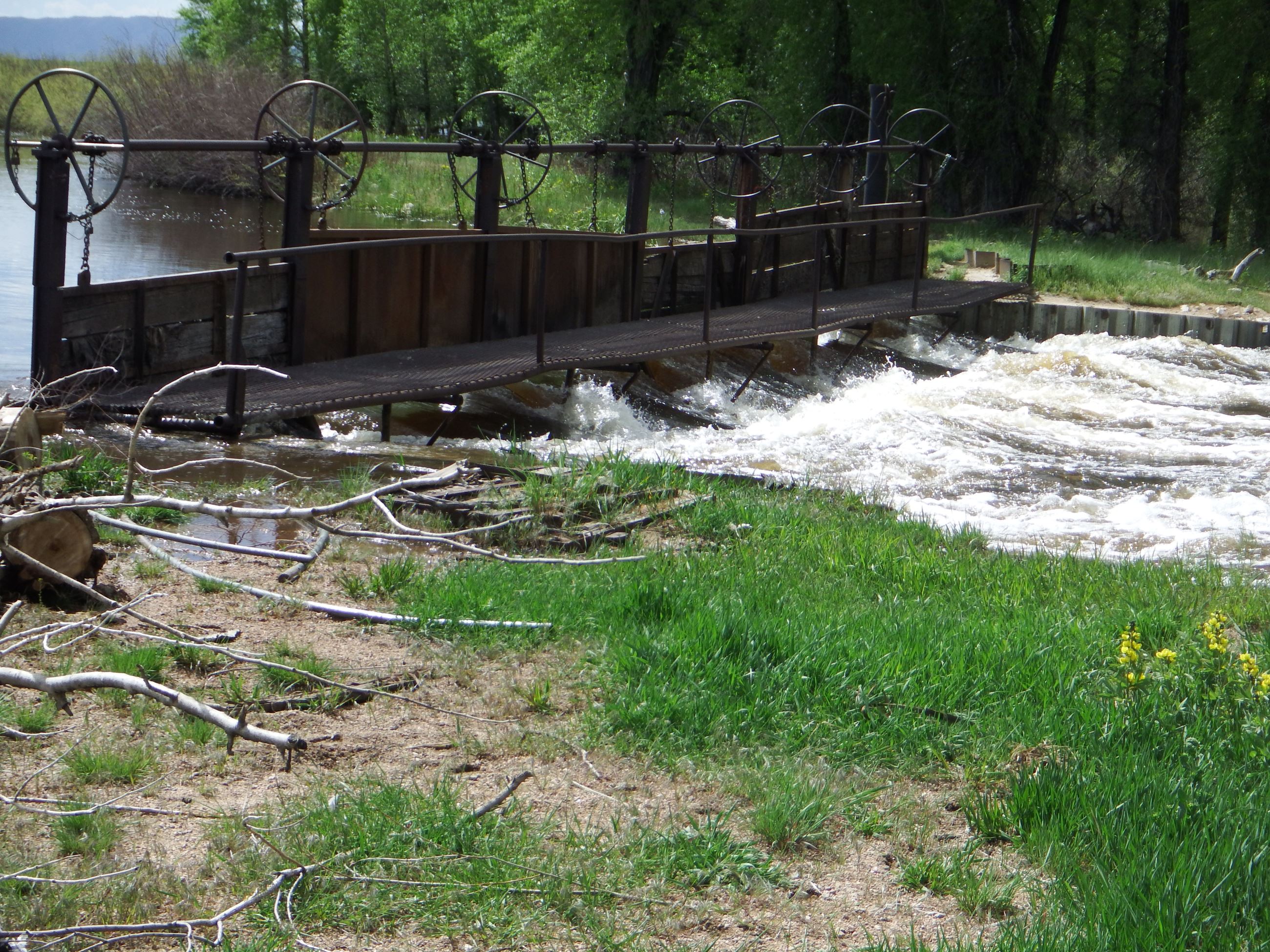 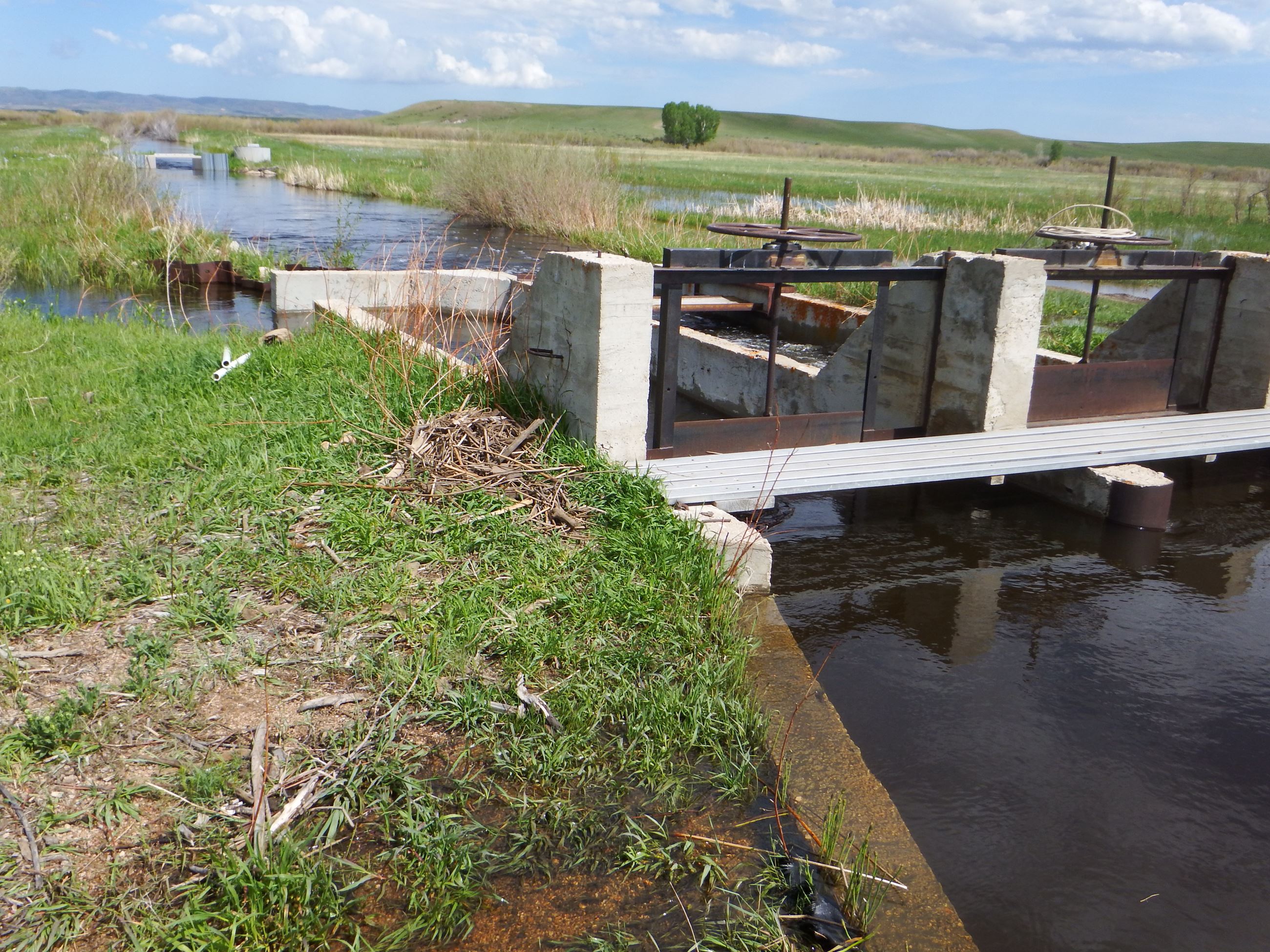 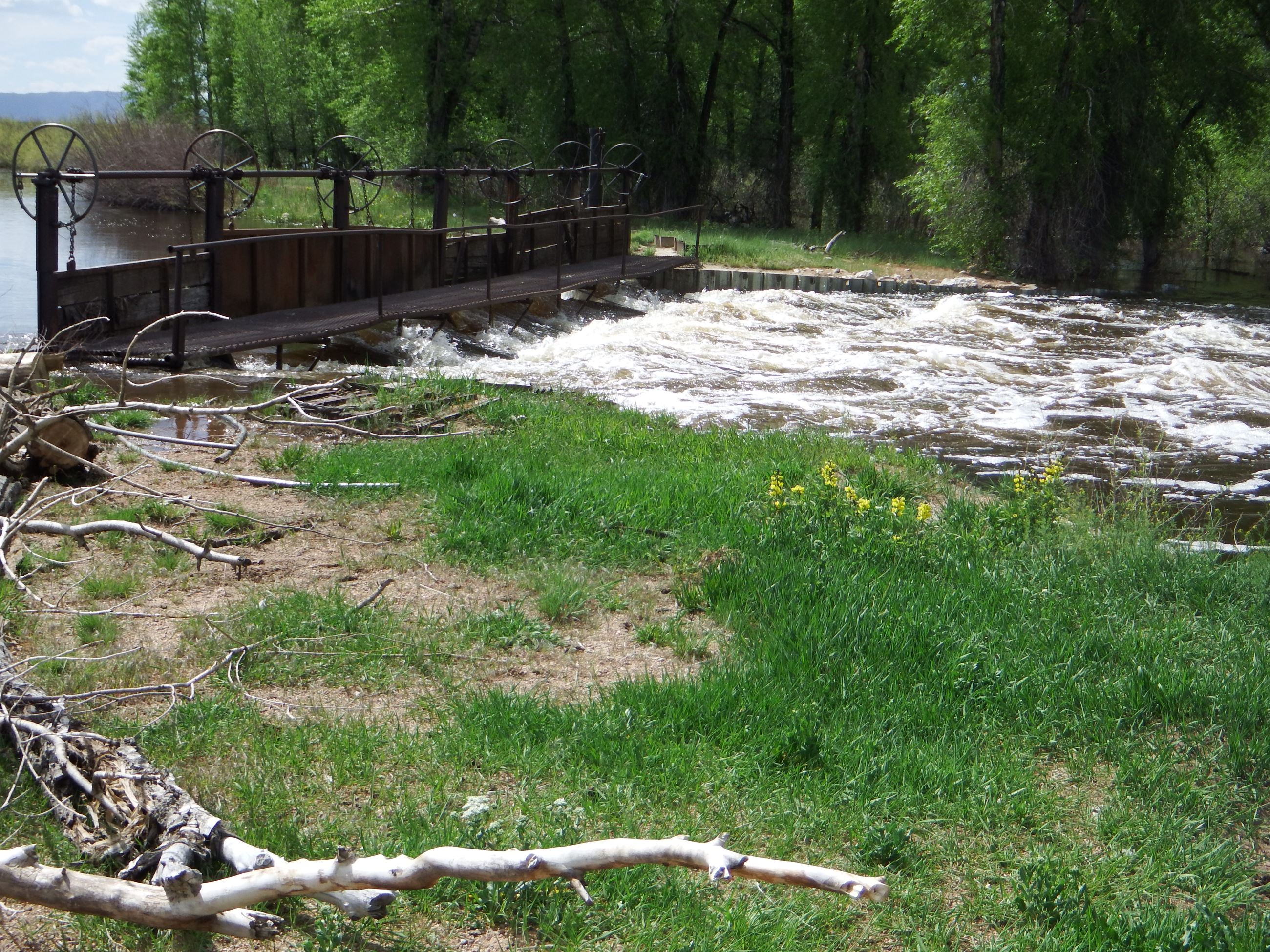 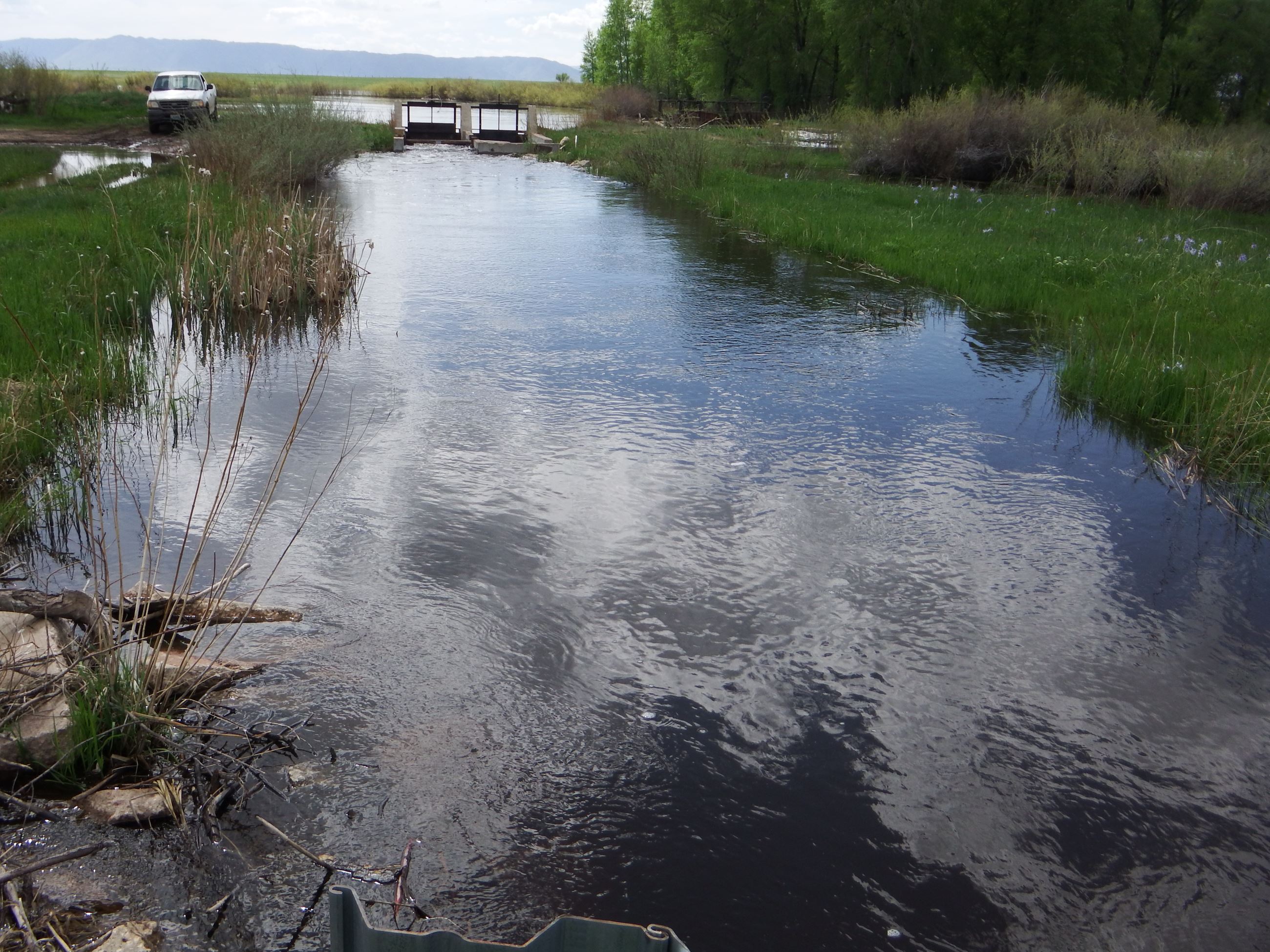 Next Previous
The Bath Ranch is an approximately 8,200-acre tract of land located at 166 Hart Road in Albany County, Wyoming. Originally part of the Overland Trail Stage Stop, the Bath Ranch is one of the oldest deeded ranches in Wyoming. This property was established in the early 1860's with the oldest recorded water rights on the Big Laramie River. As it stands today, the ranch was purchased by Henry Bath in 1928 and has remained within the Bath family ever since. The City of Laramie, in conjunction with The Conservation Fund (www.conservationfund.org), is in the process of purchasing this land through a cross-contingent purchase agreement. The City will purchase 4,600.74 acres of the Bath Ranch property, including all BLM leases, buildings, improvements, crops, timber, mineral rights and water rights, for $7,583,400. Municipal bonds will finance $7 Million with the remaining $583,400 to be paid by the municipal water system. The City's primary interest is the water rights associated with the land but will manage the property for open space, recreation and other public purposes into the future. The Conservation Fund's interest in the Bath Ranch is primarily for the preservation of wildlife habitat. 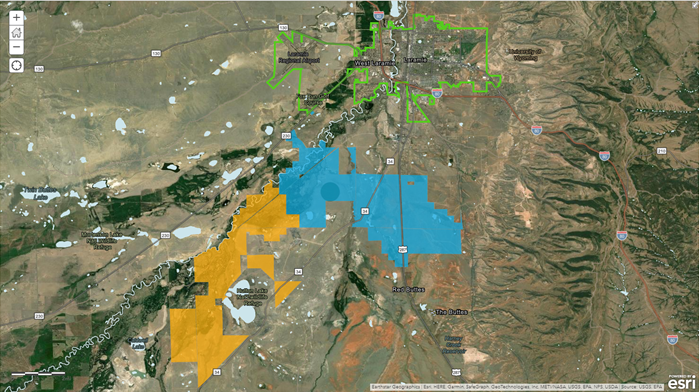 The map to the left shows the Bath Ranch property (in orange) with proximity to the Monolith Ranch (in blue) and City of Laramie city limits (in green). 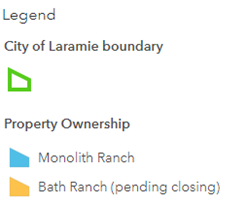 The United States Congress authorized the Pony Express as a mail delivery service in 1859, paving the way for a stage line and a series of stage stations along the route. One such route was operated by the Overland Stage Company and became known as the Overland Trail. The Big Laramie Stage Station was located on the west bank of the Big Laramie River and was a major overnight stop along the trail.
The construction of the Transcontinental Railroad marked the beginning of the end for the Overland Trail Stage Route. Remains of these stage stops are still scattered throughout Wyoming, some of which are located on the present day Bath Ranch. The trail represents an important legacy of the American west. 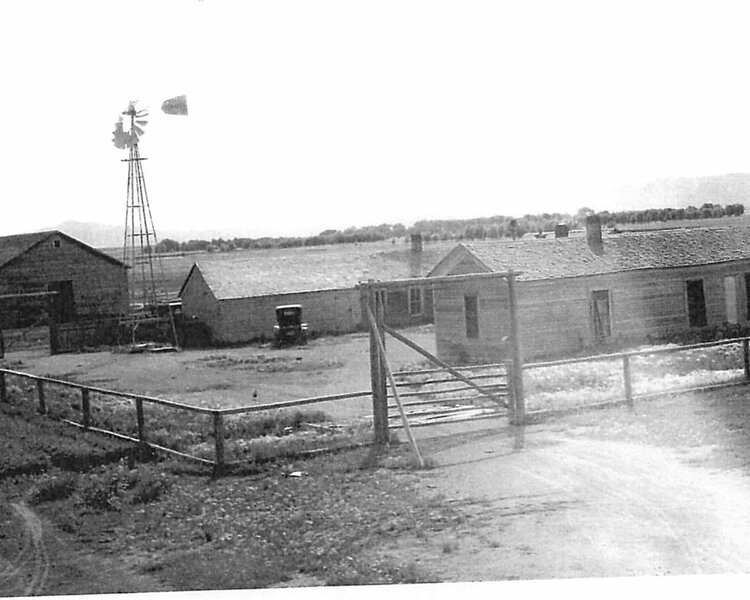 A few of the current structures on the ranch today may date back to the 1860's and include an old bunkhouse and blacksmith shop. The City of Laramie is exploring the potential of creating a Big Laramie stage stop historical site on the property to educate members of the community about the history of the Overland Trail and its significance to the City of Laramie.

Located near the Bath Ranch Property is the Big Laramie Stage Station Historical Marker. It marks the location of the historical crossing of the Laramie Plains along the Overland Trail. Remnants of life along the trail are still scattered throughout Wyoming, some of which still remain on the Bath Ranch property today, including an old bunkhouse and blacksmith shop. The main Stage Station building is located on the west side of the river, on what is known today as the Richardson's Overland Trail Ranch. Inclusion of the Bath Ranch in the National Register will be explored as a possibility.

"From 1849 through the end of the 19th century, thousands followed the Overland Trail into Wyoming, across the Laramie Plains, to a toll bridge near here on the Laramie River. The historic crossing of the marshy plains consisted of a corduroy road which today is located southwest of the modern bridge. The surviving corduroy road remnant is all that remains of the trail in this area.

In 1862, Ben Holladay, consolidated several stage and freight operations to form the Overland Stage Company, which he moved from the Oregon Trail south to the Overland Trail. The new route proved to be both shorter and safer. He improved the trail and stage stations as he rose to dominate the stage, freight, and mail businesses. Constructed in 1862, Big Laramie Stage Station served as a "home station." where drivers' routes ended and passengers obtained meals while horses were changed.

Wells Fargo and Company bought Holladay's operation in 1866, three years before the completion of the Union Pacific's Transcontinental Railroad, which ended use of the Overland Stage. The Trail, however, continued to be used by local travelers and those unable to afford railroad fare. After completing a Union Pacific grading contact, Charles Hutton, Tom Alsop, and Edward Creighton created the Hart Ranch, which encompassed the property containing the Big Laramie Stage Station. Eventually Creighton sold his share and the ranch divided in two with Alsop using the Stage Station as headquarters for his ranch on the west side of the river. The ranch is known today as Richardson's Overland Trail Ranch and is listed on the National Register of Historic Places."

Marker is located on State Highway 230 near County Route 33, on the left when traveling west. 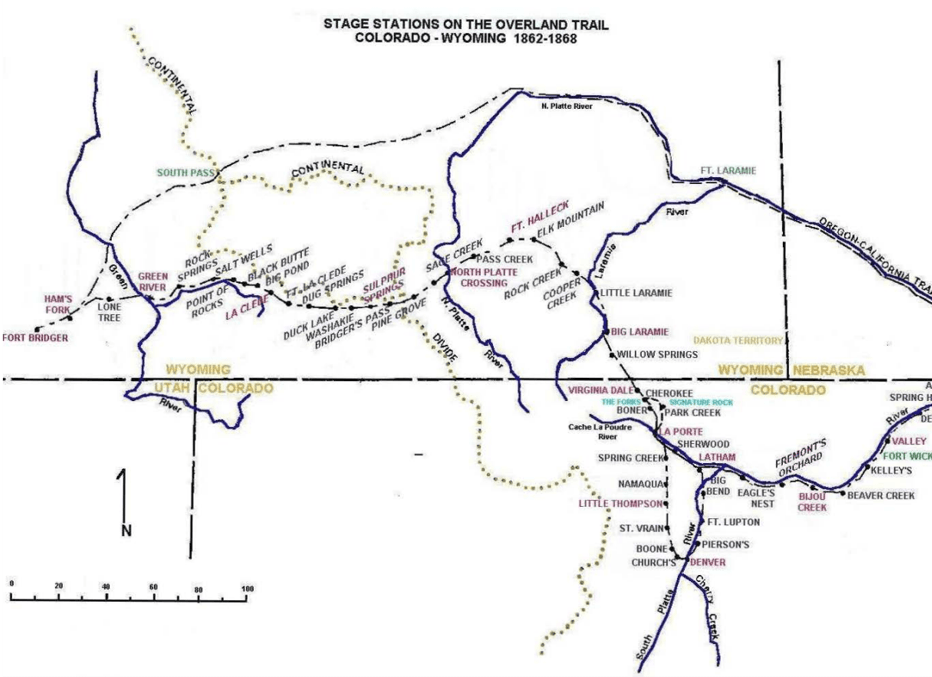